The Department of Veterans Affairs is required by law to contract with the Institute of Medicine (IOM) to provide a comprehensive Gulf War Health Study of veterans, scientifically reviewing evidence for possible connections between their illnesses and exposure to environmental agents or preventive medicine during military service. 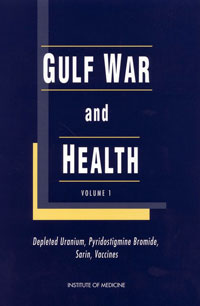 The Institute of Medicine (IOM) of the National Academy of Sciences is a non-government organization that evaluates scientific literature and provides advice. In 1998, the IOM began a series of studies — mandated by Congress — to examine the scientific and medical literature on the potential health effects of chemical and biological agents related to the Gulf War. The first study reviewed the scientific literature on depleted uranium, chemical warfare agents (sarin and cyclosarin), pyridostigmine bromide, and vaccines (anthrax and botulinum toxoid), and it has produced 10 total reports to date. Click the headline link to download a copy of the report for free.

Download Volume 8 (2010)
Gulf War and Health: Update of Effects of Serving in the Gulf War