What the VA says about Camp Lejeune water contamination

Training information and guidance on Camp Lejeune water contamination was provided by the Department of Veterans Affairs to all VA Regional Offices in 2010. 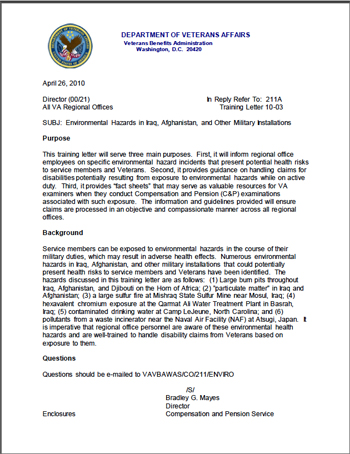 The training letter had three purposes:

It’s important for veterans and their families who were impacted by the groundwater contamination at Camp Lejeune to know how the VA is guiding its employees to handle the associated claims (aside from health care and reimbursements provided for by the Honoring America’s Veterans and Caring for Camp Lejeune Families Act of 2012).

Background from the letter
“Service members can be exposed to environmental hazards in the course of their military duties, which may result in adverse health effects. Numerous environmental hazards in Iraq, Afghanistan, and other military installations that could potentially present health risks to service members and Veterans have been identified…. It is imperative that regional office personnel are aware of these environmental health hazards and are well-trained to handle disability claims from Veterans based on exposure to them.”

General Information:
From the 1950s through the mid-1980s, persons residing or working at the U.S. Marine Corps Base at Camp Lejeune were potentially exposed to drinking water contaminated with volatile organic compounds. Two of the eight water treatment facilities supplying water to the base were contaminated by either trichlorethylene (TCE) or tetrachloroethylene (perchloroethylene, or PCE) from an off-base dry cleaning facility. The Department of Health and Human Services’ Agency for Toxic Substances and Disease Registry (ATSDR) estimated that TCE and PCE drinking water levels exceeded current standards from 1957 to 1987 and represented a public health hazard. The heavily contaminated wells were shut down in February 1985, but it is estimated that over one million individuals, including civilians and children, may have been exposed.

There has been much public interest and media coverage of the potentially harmful health effects associated with the contaminated water supply at Camp Lejeune. The National Research Council of the National Academies of Science released a report in June 2009, which found that scientific evidence for any health problems from past water contamination is limited. The evidence for amounts, types, and locations of contamination were not well-recorded at the time and cannot now be extrapolated. Therefore, conclusive proof of harmful health effects is unlikely to be resolved with any future studies.

In October 2008, the Department of the Navy issued a letter to Veterans who were stationed at Camp Lejeune between 1957 and 1987. The letter explained that the Navy had established a health registry and encouraged participation. For further information or to refer Veterans with questions regarding Camp Lejeune, the following websites have been established:

Disability claims based on exposure to contaminated water at Camp Lejeune must be handled on a case-by-case basis. Actual service at the installation during the time of water contamination must be established.

The VA’s recent practice on claims related to Camp Lejeune water contamination have been consistent (case-by-case, etc.) with this guidance.

However, on August 3, 2015, the VA announced it would begin the process of amending its regulations to establish presumptions of service connection for certain conditions and disabilities caused by exposure to contaminated drinking water at Camp Lejeune.

About the Fact Sheet

The VA notes that the Fact Sheet is not meant to “influence examiners rendering opinions concerning the etiology of any particular disability, but rather to ensure that such opinions are fully informed based on all known objective facts.” The VA asks the examiner to utilize the Fact Sheet along with other evidence in the Veteran’s record.

You may download a copy of the Camp Lejeune Fact Sheet, which is part of the VA’s April 26, 2010 letter to its Regional Offices, here.

Camp Lejeune Water Contamination
Facts and history about the issue at Camp Lejeune, along with lawsuit updates and past media coverage. Show Me

Camp Lejeune Rapid Benefits Assessment
Were you stationed at Camp Lejeune? Answer five questions to learn if you, or your family, are entitled to compensation or other benefits due to environmental hazards exposure. Take Quiz

Camp Lejeune Toxic Water Timeline
A timeline of groundwater contamination at Camp Lejeune …. for more than three decades, Marines and their families at the North Carolina base faced an unseen enemy — and one that authorities seemed slow to disclose. VetsHQ looks at the making and ongoing resolution of an environmental disaster. Show Me

• The Few, The Proud, The Forgotten: An Advocacy Group Website