Finally, two years after Congress passed the Honoring America’s Veterans and Caring for Camp Lejeune Families Act, the Department of Veterans Affairs has announced it will begin to cover out-of-pocket costs for dependents of Marines affected by the Camp Lejeune toxic water contamination at the base.

Up to 1 million people, mostly Marines and their family members, were exposed to bath water and drinking water containing more than 70 chemical contaminants including degreasers, dry cleaning solvents and flammable liquids at concentrations 240 to 3,400 times permitted safety standards. The groundwater contamination came from multiple sites on base, spills, and most notably, an off-base dry cleaning company, over a period of more than 30 years dating back to the 1950s. 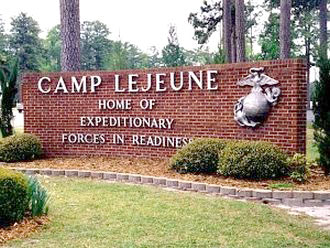 According to McClatchyDC, the lengthy process from the bill’s passage was long, and no reason was provided as to the delay. The VA wrote the regulations, and then the Office of Information and Regulatory Affairs, which is part of the Office of Management and Budget, had to approve them. Approval for the regulations was made on Sept. 9, 2014. The VA didn’t respond to a question about the length of time required for the implementation of the law.

Mike Partain was born at Camp Lejeune and suffered from male breast cancer, told McClatchyDC “institutional apathy and incompetence” at the VA were the reasons for the two-year delay between the bill’s passage and the dependents’ regulation going into effect.

This action relates only to hospital care and medical services.

Federal lawsuits aimed at recovering damages from the government for the decades-long contamination were revived this summer when N.C. Gov. Pat McCrory signed new legislation into law clarifying the state’s 1970s product liability law, which contained a “statute of repose”, or a time frame in which suits must be filed for civil claims. The U.S. Supreme Court used that state law to effectively refuse Camp Lejeune victims’ right to recover damages because their suits were filed outside of the 10-year liability period from the last act of contamination.

As a result of the Supreme Court’s action, McCrory signed N.C. Senate Bill 574 into law, which clarified the product liability law was never meant to apply to protect companies or the government from groundwater contamination liability.

Following Congress’s passage of the 2012 law, the VA’s first regulation was immediate and brought full health care services to veterans who spent at least 30 days on active duty at Camp Lejeune between Jan. 1, 1957 and Dec. 31, 1987. But the VA had told dependents suffering from covered illnesses that they would have to wait to be reimbursed.

Stephen Wilkins, of the VA Mid-Atlantic Health Care Network, told the Jacksonville (N.C.) Daily News, “Family members will be reimbursed for the service fees that they encounter in the private sector. VA acts at the last payer.”

Are You Eligible for Benefits for Camp Lejeune Toxic Water?
Take Our Free Rapid Assessment Quiz

The 15 covered diseases or conditions caused by Camp Lejeune toxic water are:

Families and dependents will need to provide documentation to prove their relationship to a veteran. Those include marriage licenses or birth certificates, or copies of orders or base housing records as proof of residence.

Sen. Kay Hagan, who is battling to hold onto her seat in North Carolina’s fall election, said in a statement, “Since coming to the Senate, I have been proud to advocate on behalf of those affected by the water contamination at Camp Lejeune. My office has been pushing the VA to finalize these regulations since Congress passed the bipartisan bill to provide care for contamination victims, and I am relieved that action has finally occurred today. Our veterans and their families exposed to toxic water contamination have waited too long for answers, and I am pleased they will now begin to receive the critical health care benefits they deserve. This is an important step, but much remains to be done to correct this wrong, and I will continue fighting in the Senate for the people who lived and worked at Camp Lejeune during this tragedy.”

Hagan, along with fellow N.C. Senator Richard Burr, has introduced legislation in the Senate to increase the number of veterans and family members eligible for health care benefits by extending the covered period four years back to 1953. A 2013 study by the Agency for Toxic Substances and Disease Registry (ATSDR) estimated drinking water at Camp Lejeune exceeded the maximum contaminant level (MCL) for certain cancer-causing carcinogens as far back as 1953.

Burr added in a statement: “Unfortunately, many who were exposed to the contaminated water have already died as a result of their exposures and will not be able to receive the help this law provides. I fully expect VA will now move swiftly to implement all the regulations and extend a helping hand to the victims of this tragic episode in our nation’s history.”