Despite talk of change of attitude at the Department of Veterans Affairs with regards to retaliation against whistleblowers, yet another whistleblower has placed on administrative leave — but the employee has a U.S. Senator on his side.

Brandon Coleman, a Marine veteran who has worked at the Phoenix VA Health Care System for seven years, filed for whistleblower protection in December with the Office of Special Counsel, which means he should be protected as a federal employee for speaking out. He said his supervisors told him he’d be fired if he came forward with his concern related to how the risk of suicides are handled at the Phoenix VA. 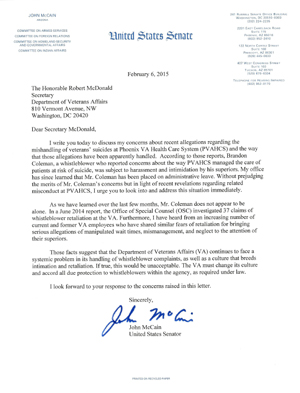 Coleman is an addiction therapist at the Phoenix VA. He helped develop a 52-week outpatient program for veterans enrolled in Veterans Court. In mid-January, Coleman came forward with his concerns about the Phoenix VA, which has lost six veterans to suicide in the last three years. “It’s like being punched in the gut over and over again,” he said. In one case one of the veterans in his program relapsed. Coleman said he went to veteran’s court and was told his next stop was jail. “Instead the veteran decided to jump off a rooftop and commit suicide,” he said. Another veteran even killed himself on VA property. The VA has confirmed this with local media in Phoenix, but was not able to release any details. “How symbolic is that as a veteran to commit suicide on VA property, and nobody knows about it?” Coleman said.

One week ago, Coleman was placed on administrative leave by the Phoenix VA.

“Whenever there’s a suicide, I’d say, ‘Wow, this isn’t cool; what can we do to learn from it?'” Coleman explained. “And, it always kind of fell on deaf ears.”

He said he brought his concerns to VA management and was told not to talk about them publicly, despite his whistleblower protection status.

“I’ve been told everything from if I come forward, I would be terminated,” Coleman said. “That’s a common statement. I didn’t believe any of it, until I was put on administrative leave for allegedly threatening other employees.”

On Friday, Coleman received some welcome assistance from U.S. Sen. John McCain (R-AZ), who fired off a letter to VA Secretary Robert McDonald.

Coleman provided a copy of the letter to VetsHQ. McCain writes:

I write to you today to discuss my concerns about recent allegations regarding the mishandling of veterans’ suicides at Phoenix VA Health Care System (PVAHCS) and the way those allegations have been apparently handled. According to those reports, Brandon Coleman, a whistleblower who reported concerns about the way PVAHCS managed the care of patients at risk of suicide, was subject to harassment and intimidation by his superiors. My office has since learned that Mr. Coleman has been placed on administrative leave. Without prejudging the merits of Mr. Coleman’s concerns but in light of recent revelations regarding related misconduct at PVAHCS, I urge you to look into and address this situation immediately.

As we have learned over the last few months, Mr. Coleman does not appear to be alone. In a June 2014 report, the Office of Special Counsel (OSC) investigated 37 claims of whistleblower retaliation at the VA. Furthermore, I have heard from an increasing number of current and former VA employees who have shared similar fears of retaliation for bringing serious allegations of manipulated wait times, mismanagement, and neglect to the attention of their superiors.

Those facts suggest that the Department of Veterans Affairs (VA) continues to face a systemic problem in its handling of whistleblower complaints, as well as a culture that breeds intimidation and retaliation. If true, this would be unacceptable. The VA must change its culture and accord all due protection to whistleblowers within the agency, as required under law.

I look forward to your response and concerns raised in this letter.

The VA has declined to comment on Coleman’s leave.

For Coleman, he has said he would like to see all employees of the VA trained in suicide prevention, as well as the creation of an on-site detoxification facility for veterans who arrive at the hospital intoxicated and a likely higher risk of suicide.

VetsHQ will continue to monitor news events at the Phoenix VA.