Army apologizes to vets affected by chemical weapons in Iraq

Update: The Army is reaching out to unit members regarding potential exposure. Soldiers who served in Iraq with the Army’s 702nd, 756th or 710th Explosive Ordnance Disposal companies, or with “Bushmaster Company,” 1st Battalion, 14th Infantry Regiment, will likely hear from the Army in its search for soldiers who may have been exposed to chemical warfare agents. Others who feel they were exposed or were not contacted can call the hotline at 1-800-497-6261.

Months after revelations that U.S. soldiers were not adequately treated for exposure to chemical weapons in Iraq, the Army’s under secretary has apologized to those service members. 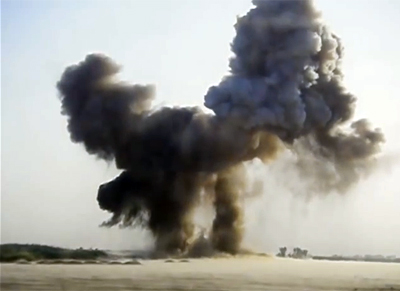 A cache of mustard rounds found buried in a peninsula near Taji, Iraq. Soldiers detonated the rounds, resulting in this exposion. You can view the video here: https://www.youtube.com/watch?v=HkJwMg7xj2U

Along with that apology by Under Secretary Brad Carson comes a commitment to get treatment and health care support for veterans who were affected, as well as recognition for those who were denied awards, according to a report in The New York Times.

Carson acknowledged to The Times that the Army did not follow policy in caring for troops exposed to chemical weapons, old and abandoned munitions that units found in myriad places around Iraq. The under secretary also said the Army had reversed an earlier decision denying a Purple Heart to a soldier who was burned by a sulphur mustard agent, and that additional medals would be reviewed and issued to veterans. This change specifically affects service members injured by insurgents’ use of old chemical shells in roadside bombs. All four services say wounds caused by such incidents would qualify for a Purple Heart.

“To me, the scandal is that we had protocols in place and the medical community knew what they were, and yet we failed in some cases to implement this across the theater,” he said. “That was a mistake, and I apologize for that. I apologize for past actions and am going to fix it going forward.”

Since November 2014, the Department of Defense has attempted to contact service members and veterans who may have been exposed to chemicals — warfare agents such as mustard agents or sarin — during Operation Iraqi Freedom. The DoD even set up a hotline number — 1-800-497-6261 — for veterans who had been exposed by not contacted by the department to report their conditions.

This effort was in response an Oct. 14 article in The New York Times, “The Secret Casualties of Iraq’s Abandoned Chemical Weapons,” which detailed its investigation and the Pentagon’s acknowledgement that as many as 600 U.S. troops had reported chemical exposure.

Carson said that new instructions have been distributed to the military services to ensure that those veterans identified or who had called the hotline number be screened and properly treated. This instruction would also cover troops who were exposed to chlorine (used as a weapon by the enemy) during active duty service.

What the military has released about those exposed:
• Military expects to screen at least 1,500 active duty service members or veterans
• 830 noted on post-deployment health forms they believed they had been exposed to chemical weapons
• 540 who called the exposure hotline set up by the DoD
• An additional 275 indentified by The Times’ reporting or those who served alongside deployed units

Chlorine exposure is new to this effort, as Carson said to The Times:

“We are committed to finding every chlorine incident,” he said. He added, however, that until the services had done more research and interviewed potential victims, the working group would not have a firm tally of the number of wounded troops. As an estimate, he said, it could be in the dozens.

This estimate was echoed by the Marine Corps, which said through a spokesman that the corps had identified 20 potential chlorine victims to interview, along with more than 120 other veterans or active-duty Marines who might have been exposed to other chemical agents.

What you need to know about disability benefits

It’s about quality of life. Even the smallest of benefits can mean so much. Want to know more about your earned, entitled benefits? Check out our Veterans and Benefits section. Tell Me

Documents you need to file for benefits

Before leaving military service, make sure you have all of the documentation you will need to submit a claim for veterans benefits. If you have already separated from service, use this checklist to see what you’ll need. Show Me

What you need to know about benefits for burn pit exposure, associated diseases and conditions, burn pit locations, and downloads of research and studies. Show Me

Did you serve in the Gulf War, or in Iraq and Afghanistan near oil well fires, open burn pits or other airborne hazards? Answer 3 questions to learn if you may be entitled to compensation or other benefits. Take Quiz