It’s always sad to hear when an icon passes, but it seems especially tragic and shocking when that icon is comedy legend Robin Williams. 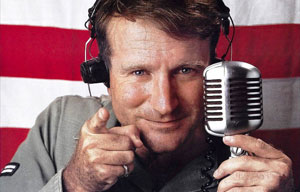 For many, he’ll be known as Mork from Ork, or Mrs. Doubtfire, or an adult Peter Pan, or even an animated Genie. But for a lot of veterans, he’ll always be Adrian Cronauer, the former Air Force sergeant and disc jockey in the 1987 film “Good Morning, Vietnam.”

Williams was found dead in his Marin County, California, home on Monday. He was 63.

It seems appropriate to remember Williams for his work. And for us, that means “Good Morning, Vietnam.” Some quotes from Williams in that movie, courtesy of IMDb.com:

Goooooooood morning Vietnam! It’s 0600 hours. What does the “O” stand for? O my God, it’s early! Speaking of early, let’s hear it for that Marty Lee Drywitz. Silky smooth sounds, making me sound like Peggy Lee…

You know, you’re very beautiful. You’re also very quiet. And I’m not used to girls being that quiet unless they’re medicated. Normally I go out with girls who talk so much you could hook them up to a wind turbine and they could power a small New Hampshire town.

I can’t even make fun of Richard Nixon, and there’s a man who’s screaming out to be made fun of.

If you’re prefer to look instead of read, just hit the “play” button and watch Williams go.

(Imitating Lawrence Welk) Thank you for the lovely tune, that funky music will drive us till the dawn. Let’s go, let’s bugaloo till we puke!

The soundtrack for the movie “Good Morning, Vietnam” was equally energizing. Click to play a few of the tunes.

Nowhere to Run — Martha and the Vandellas

I Got You (I Feel Good) — James Brown

What A Wonderful World — Louis Armstrong

And one final quote from “Good Morning, Vietnam”

Gooooooooood-byyyyyyye Vietnaaaaam! That’s right, I’m history… I’m outta here. I got the lucky ticket home, baby. Rollin, rollin, rollin’… keep them wagons rollin’, rawhide! Yeah, that’s right… the final Adrian Cronauer broadcast… and this one is brought to you by our friends at the Pentagon. Remember the people who brought you Korea? That’s right, the U.S. Army. If it’s being done correctly, here or abroad, it’s probably not being done by the Army.

Rest in peace, Robin Williams. And thanks for the laughs.