The Christmas season has always been of special significance to those who serve their country in far away places. We’ve all probably read of the terrible trench battles of World War I and the spontaneous truce the front-line Allied and opposing German troops declared one particular Christmas Eve.

In World War II, one Christmas also held a special significance to my family, but not a happy one. German and Allied forces were once again involved.

On 20 December 1944, the German army launched a last-ditch attempt to drive Allied forces back to the beaches of Europe. It was described as the Battle of the Bulge, a breakthrough of Allied lines by a furious German counterattack. Eventually, Allied forces overcame the German effort, but at the cost of tens of thousands of casualties on both sides. There was no Christmas truce that year, no shaking hands and singing carols with the opponents. 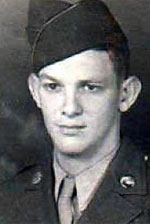 My half-brother, Harold,  was one of those who died during that battle.  He was barely out of high school, where he’d starred in football. After enlisting, Huck, as we called him, was assigned to a tank destroyer outfit and shipped to Europe.  He was the youngest son of my father by his first wife, and I only met him on rare occasions.

I can only now imagine Dad’s sorrow when the War Department notified us of his son’s death. Dad was of the ilk that wouldn’t display personal distress in front of my twin sister and me. We were just 12 that year  and the war meant to us gas rationing, no bubble gum, collecting tin foil, flattening and saving tin cans, collecting cattails to be used in life jackets as a substitute for kapok, knitting blanket squares, buying savings stamps and war bonds, and joining Dad during his tours of plane spotting up on the highest hill in the area.  Death was a vague and distant concept to us then.

So I did not fully appreciate the price that Dad  paid in World War II until I saw my own children and grandchildren enter the military and go in harm’s way.  Now I only wish I had been more sensitive to my Dad’s sorrow and less concerned with what presents I would find under the tree. During that Christmas season of 1944,  Huck was buried far from home.  Dad never got the chance to visit his grave.

A final thought:  It would be a travesty not to think about those left at home at Christmas with a family member overseas.  I still hear tales of my wife staying up all night one Christmas Eve when I was in Vietnam, trying to assemble  toys that Daddy was not there to take care of.  A minor difficulty, perhaps, but one example of the vacuum in family life developing when a military member is gone.  It’s not just the soldier who serves our country … it’s the whole family with their love and support that boosts and maintains the morale of our deployed armed forces.  In many ways, I’ve discovered, it’s harder to stay behind and keep up the home front than to cope with the overseas assignment in  troubling times.  May we always keep those serving in mind and may we always give thanks at Christmas time for the freedoms they earned and continue to guard in this great country of ours.