DECEMBER 2015 UPDATE: The VA will propose a service connection for exposure by Camp Lejeune veterans to contaminated water at the base and eight diseases. Read more here

In a huge victory for Marine veterans and their families, the Department of Veterans Affairs (VA) announced it will begin the process of establishing Camp Lejeune presumptive service connections for certain diseases resulting from exposure to toxic groundwater over a 30-year period at the North Carolina base. 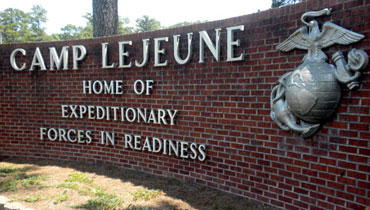 In an August 3, 2015 statement, the VA said it is currently reviewing kidney cancer, angiosarcoma of the liver, and acute myelogenous leukemia for “potential presumptive service connection.”

“The diseases … are known to be related to long-term exposure to the chemicals that were in the water at Lejeune from the 1950s through 1987,” the VA statement said. “The chemicals are Benzene, Vinyl Chloride, Trichloroethylene and Perchloroethylene, which are known as volatile organic compounds, used in industrial solvents and components of fuels.  ATSDR and VA representatives will meet at ATSDR offices on August 19 to begin discussions on establishing these presumptions.”

ATSDR is the Agency for Toxic Substances and Disease Registry.

“VA will also work with ATSDR and potentially the National Academy of Sciences to evaluate the body of scientific knowledge and research related to exposure to these chemicals and the subsequent development of other diseases. VA will carefully consider all public comments received when determining the final scope of any presumptions,” the VA statement said.

The VA’s announcement is being hailed as a huge victory for Marines and their families who were stationed on the base at any point between 1953 and 1987.

“Today’s announcement is a testament to the good things that can happen when Congress and the VA work together in concert to overcome the agency’s bureaucracy to ensure our nation’s veterans are afforded the benefits and care they deserve when they are harmed while serving our great nation, whether it be through combat or environmental exposures,” Mike Partain, who was born at Camp Lejeune and contracted male breast cancer, said, according to the Associated Press.

““I’m disappointed that we had to pressure the VA to do the right thing for our veterans in the first place,” Burr said. “The scientific research is strong and the widespread denials of benefits will soon end. Now, these veterans and their families members will not have to fight for benefits they are due. I look forward to seeing the commitment Secretary McDonald gave me realized without unnecessary delay and I credit him and Dr. Breysse of the Agency for Toxic Substances and Disease Registry for their commitment to righting this wrong.”

Tillis said, “The evidence has been accumulating for years now — many of those who lived or worked at Camp Lejeune in years past developed certain diseases after exposure to contaminated drinking water. Compensating these victims, our Nation’s heroes and their families, is simply the right thing to do and I commend Secretary McDonald for taking this bold step for responsible government.”

Health officials believe that as many as 1 million Marine veterans and their family members were affected by the tainted water, which was caused by decades of leaking fuel tanks and chemicals released into the soil and water by an off-base dry cleaner.

The VA currently provides health care to veterans who were stationed at Camp Lejeune for at least 30 days between August 1, 1953 and December 31, 1987 as a result of the Honoring America’s Veterans and Caring for Camp Lejeune Families Act of 2012. That legislation also provides for reimbursement of healthcare expenses for those 15 conditions to eligible family members who resided at Camp Lejeune during that time period.

The VA extended the deadline for veterans to request status as a Camp Lejeune veteran until September 24, 2016 — and be eligible for retroactive reimbursement of out-of-pocket medical costs back to August 6, 2012, the day the legislation authorized the VA to begin providing benefits to Camp Lejeune veterans. It is undetermined at this time whether that deadline will be revisited, removed, or extended.

This victory comes after recent defeats in court for Camp Lejeune families, each denying or limiting their rights to sue for harm caused by the contaminated groundwater.

The U.S. Supreme Court heard ruled in a 7-2 decision on June 9, 2014, that a group of homeowners in North Carolina cannot suit a company that contaminated their drinking water decades earlier because the state deadline of 10 years had passed before they filed suit against the company. Based on the Supreme Court decision, the 11th U.S. Circuit Court of Appeals also ruled that time had run out for Camp Lejeune victims and families to file lawsuits seeking damages.