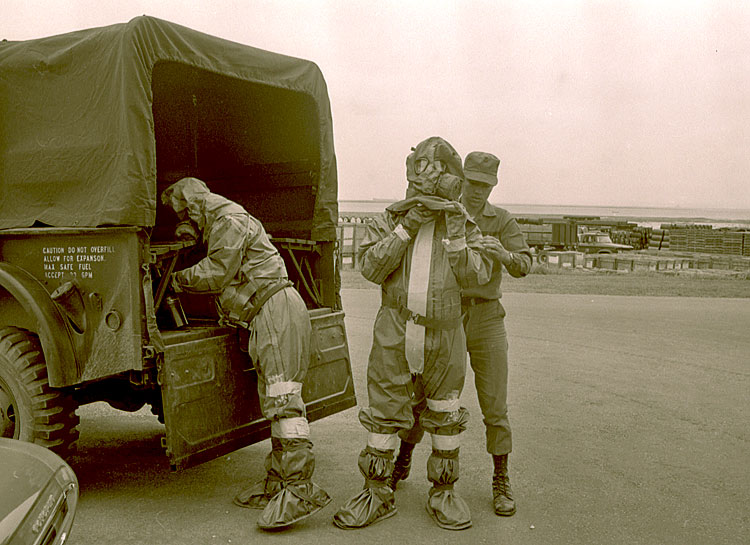 During a May 1971 briefing session for Japanese press, U.S. Army personnel demonstrate actions that would be taken in the event a chemical munition was found to be leaking during transport. (Okinawa Prefectural Archives, National Archives and Records Administration)

Recently released documents indicate that herbicide agents and other chemicals were once present at the U.S. Army Machinato Service Area, now known as Camp Kinser, in Okinawa, Japan. Learn more about these new developments and how it may affect your claim.

Writer Jon Mitchell states that a document released in September 2015 by the Pentagon revealed the presence of the toxic herbicide agent at the facility in addition to other hazardous chemicals. The 82-page document, obtained through a Freedom Of Information Act (FOIA) request, includes the results of a 1974 study conducted by the U.S. Army Environmental Health Engineering Agency (EHEA) which found a “high concentration of chlordane, DDT, malathion, dioxin, and polychlorinated biphenyl” in samples taken from water, soil, sediment, and aquatic fauna at Camp Kinser. According to Mitchell, “The findings contradict Pentagon assertions as recently as 2015 that Agent Orange was never stored on Okinawa.”

The released document also states, “… from 1945 to 1973, the U.S. Army stored large amounts of hazardous materials/wastes in the opening alongside the shorelines at the U.S. Army Machinato Service Area (now Camp Kinser).” A detailed timeline within the first few pages of the document provide further information on studies conducted at the site, the contaminated areas and clean-up efforts.

While Mitchell writes “only a handful of U.S. veterans have been awarded compensation for exposure to Agent Orange on Okinawa,” the release of this information has the potential to affect hundreds, if not thousands, of veterans who were stationed at Camp Kinser and have previously had their benefit claims denied. In addition veterans who had been stationed in Okinawa and have yet to file a claim now have new information available for when they file.

According to the document the following areas of Camp Kinser were contaminated with heavy metals and pesticides by the Army between 1945 and 1973:

The following areas were used as local disposal sites during clean-up operations and may be contaminated:

Reported on Monday, March 6, 2017, two veterans who were stationed on Okinawa have won separate Board of Veterans Appeals cases where each claimed their health conditions were caused by exposure on the island to Agent Orange.

The first case, from October 2015, a veteran was granted a disability claim for prostate cancer when the court found a service connection between the disease and his service in the late 1950s. According to Stars and Stripes:

“The veteran said he was exposed to 2,4-D and 2,4,5-T — later known as Agent Orange — JP-4 jet fuel, benzene and other chemicals while working on the flight lines for hours at a time with no protection. … The veteran said the chemicals were used to control vegetation on flight lines, runways and around “structures” on Okinawa.”

The veteran provided newspaper articles, family research and testimony to back his claim.

The second case involved a veteran who was exposed on Okinawa between 1968 and 1970 with the defoliant spilling on him numerous times during loading and unloading from cargo ships.

The VA continues to deny Agent Orange was ever on Okinawa: “VA has no credible evidence of Agent Orange use, storage, testing, or transportation in Okinawa, and thus no evidence to support claims of exposure to Agent Orange during military service in Okinawa.”

But a properly prepared veteran, backed with evidence, can win their case.

Think You’ve Been Exposed to Agent Orange at Okinawa?

Learn about conditions and diseases associated with Agent Orange. Claims for exposure to herbicide agents while stationed at Okinawa would be decided by the VA on a case-by-case basis with the burden of proof resting with the veteran to service connect their condition or disease to their active duty service.

You can read one case a veteran won on appeal for herbicide agent exposure at Okinawa. You can read the decision here.

There you will find information on the three elements needed for a viable claim and the five pathways to a service connection for current symptoms, health conditions or diseases.

Learn more about the Freedom of Information Act – http://www.foia.gov/

Retrograde chemicals from Vietnam are pictured at Camp Kinser, Okinawa, in May 1971. (Okinawa Prefectural Archives, National Archives and Records Administration)