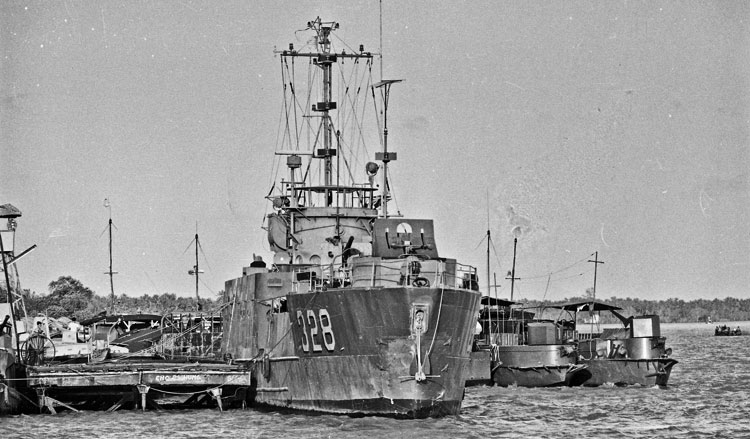 Part of the U.S. Brown Water Navy docks along the Mekong River in Vietnam in 1968. (Photo by Tommy Japan via Flickr)

Service members serving on brown water craft operating in the rivers and inland waterways of Vietnam during the Vietnam war — those boats or ships in Vietnam that were part of the Mobile Riverine Force (MRF, or “Riverines”) or Inshore Fire Support (ISF) Division 93 — are presumed to have been exposed to herbicides during active duty service, including Agent Orange.

That’s the same presumption of herbicide exposure for those Navy and Coast Guard veterans as those who served in-country, on the ground in the Republic of Vietnam (RVN).

Military records need to confirm that those veterans were aboard a ship, boat or craft that operated on the inland waterways of Vietnam to qualify for presumption of herbicide exposure.

Additionally, if a veteran served on a craft that carried the designations below, that veteran also is presumed to have been exposed to herbicides. A veteran’s military record will need to confirm they were on board the craft. You can check our list of ships and craft listed by the VA as operating on Vietnamese waterways.

Update: Rep. Chris Gibson (R-NY) has reintroduced the “Blue Water Navy, Vietnam Veterans Agent Orange Act” (H.R. 969) in the House of Representatives, along with 130 original House sponsors. Co-sponsors are continuing to be added to that overwhelming bipartisan support. A previous version of the bill (H.R. 543) had 258 co-sponsors but was not brought out of committee for a vote before the last Congressional session ended. In the Senate, Sen. Kirsten Gillibrand (D-NY) is preparing to introduce identical legislation. One of the key factors that has been holding up this legislation has been the uncertainty of the final cost for treating all the sailors and fleet Marines who are sick with diseases recognized by the VA to have been caused by exposure to Agent Orange. VetsHQ will continue to follow this issue and provide updates.

Under the Bush administration, and without public notice or regulatory comment or input, the VA changed its guidelines in February 2002 such that, in order for a Vietnam veteran to be presumed to have been exposed to Agent Orange, that Navy, Coast Guard, or Marine veteran who served aboard ships must demonstrate that he or she actually set foot in Vietnam, regardless of their ships duties or how far offshore the ship might have been at any given time. Since proof of short-term visits or transits on land are in many cases unable to be verified, even if the ship was logged in as being within the harbors of Vietnam, the presumption of exposure to Agent Orange and other herbicides was disallowed. This has come to be known as the “boots on the ground” requirement.

In 2004, former Navy Commander Jonathan L. Haas, who served in Vietnam on the USS Mount Katmai and suffers from Type 2 diabetes and associated secondary illnesses, files for benefits. The VA denies his claim an the Board of Veterans’ Appeals rules against Haas because he did not set foot on land. In 2006, Haas appeals his case, and the U.S. Court of Appeals for Veterans Claims rules in his favor to receive benefits related to Agent Orange. The VA appeals this ruling to the U.S. Court of Appeals for the Federal Circuit, which rules in 2008 that the VA can change the rule for Blue Water veterans, meaning that Haas’ benefits claim is denied. In January 2009, the U.S. Supreme Court declines to hear Haas’ appeal. 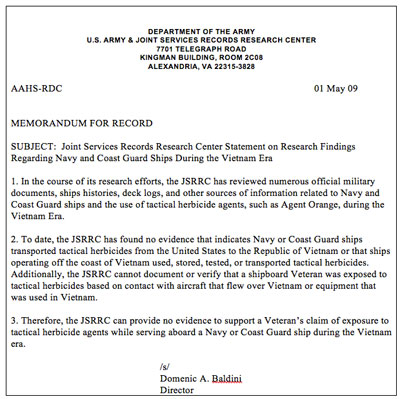 As of 2009, for veterans who claim to have served on a ship that stored or transported herbicides, VA staff, in accordance with the VA Manual M21-1MR, Part IV, Subpart ii, Chapter 1, Section H, Topic 2 (updated August 7, 2015) will place a copy of the following [U.S. Army and Joint Services Records Research Center’s (JSRRC’s)] memorandum in the veteran’s claim folder to “establish that the JSRRC has no evidence to support a claim of herbicide exposure based solely on shipboard service.”

What is the practical impact of this memorandum? To the veteran who served on a ship that the veteran believes stored or transported herbicides, the VA states emphatically that “Agent Orange was not transported, stored, or used aboard U.S. Navy or Coast Guard ships” (VA Adjudication Manual M21-1, Part IV, Subpart ii, Chapter 1, Section H, Topic 2 (g) updated August 7, 2015).  This 2009 JSRRC Memorandum remains in the VA’s Adjudication Manual (recently renamed “Live Manual”), last updated in August 2015.

Presumptive service connection (not based on herbicide exposure) for non-Hodgkin’s lymphoma (NHL) is based solely on service in the RVN, including naval service in the offshore “blue water” of the RVN.  There is no ‘boots on the ground’ requirement. There is no requirement for NHL to manifest 10% or more after service. Veterans filing a claim for NHL should reference 38 CFR 3.313 in their communication with the VA.

Other than this diagnosis, however, the Veteran must provide evidence that there was specific exposure to herbicide agents, including Agent Orange. The general premise is that personnel serving on the ships anchored in the open sea did not experience the same exposure as personnel on the ground.

The conversation continues — additional diseases as a result of exposure, as well as ships that served offshore during the Vietnam War continue to be added. Additional ships were added to the list in November 2015 with service as far back as the early-1960s.  There is now a list of more than 340 ships that were operated by the U.S. Navy and Coast Guard off the shores of Vietnam.

Any claim filed by Blue Water Veterans for compensation would be decided by the VA on a fact-based basis. This means evidence must show:

Service aboard a ship that was anchored in an open deep-water harbor along the RVN coast, such as Da Nang, Vung Tau, or Cam Ranh Bay does not establish presumptive exposure to herbicides, according to the VA. The VA reports one exception: If the Veteran served as a coxswain aboard ship and went ashore while the ship was anchored.

It should be noted that the Board of Veterans Appeals has twice ruled in favor of a veteran’s claim that Da Nang Harbor is an inland waterway for the purposes of service-connected exposure (in 2004 and 2009).