As the scandal surrounding wait times at VA hospitals and clinics roiled on, the Obama Administration announced a new push to end homelessness among veterans by 2015. 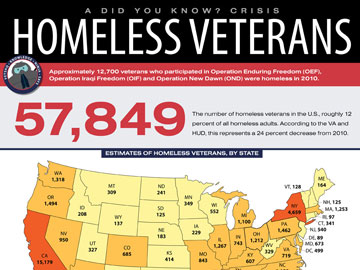 Click to view research and an infographic on the problem of homeless veterans.

First Lady Michelle Obama said during a White House ceremony announcing the “Mayors Challenge to End Veteran Homelessness” that the goal was achievable and had been part of the administration’s plans since 2010. But new emphasis and energy to meet the goal comes in the form of dozens of city, state and local officials who have committed to the effort — 77 mayors, four governors and four county officials, according to The New York Times.

“But even one homeless veteran is a shame, and the fact that we have 58,000 is a moral outrage,” Mrs. Obama said. “We should all be horrified.”

The number of homeless veterans, 57,849, represents just 0.3 percent of the veteran population but 12 percent of all homeless adults. According to the VA and the U.S. Department of Housing and Urban Development, that’s a 24 percent decrease from 2010.

President Obama has proposed a 14 percent increase in his fiscal year 2015 budget, to $1.6 billion, for the purpose of finding homes for veterans who struggle financially or are homeless.

If you’d like to learn more about the problem of homeless veterans in the U.S. click here or on the graphic.